This story was also featured in the New York Times… view here.

Dick Aplin met Peggy Hoyt in 2005, when she moved into RiverWoods. Soon after she arrived, Ms. Hoyt was invited to sit at an empty spot at a table in the main dining room, next to Mr. Aplin, and they were introduced. They were both widowed and had ten children between them. 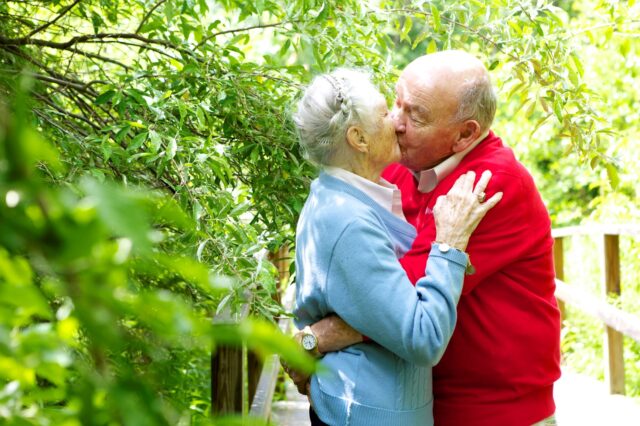 A romance bloomed and they married in October 2006, becoming the first couple from the community who met and had their wedding at RiverWoods. Around 275 wedding guests attended including their children, grandchildren, and great-grandchildren, with the catering provided by RiverWoods.

Two Generations of Weddings at RiverWoods

Almost exactly fourteen years later, Mr. Aplin’s granddaughter, Mia Aplin Rollins and Samual Sebastian Pihan, both 25, became the youngest couple ever to get married at RiverWoods Exeter. It was her mother’s idea, shared Ms. Rollins. She had planned a big Southern wedding in May at her family’s summer home before it was canceled because of the coronavirus, and instead, they had their wedding ceremony in Gooch Park on October 3, attended by their parents and Mr. Aplin.

“It was a beautiful spot and the best day of our lives,” said Ms. Rollins. “It meant everything to me and my husband that my grandfather was able to be at our wedding. Thank you so much for all that RiverWoods did to facilitate the day!”

In a 2011 video called “When Dick met Peggy – A RiverWoods Love Story,” Mr. Aplin says that the marketing material for RiverWoods doesn’t mention romance as being one of the amenities of life at the community, but that it does occur. “You should change your brochure,” he joked at the time.

Peggy Hoyt-Aplin passed away in January 2015. Dick Aplin, 91, a retired professor of Cornell University, still lives at RiverWoods Exeter in their shared apartment. Mr. Aplin is a vibrant part of the RiverWoods community and is active in many roles, not the least of which is serving as Dean of the RiverWoods Business Management program, a joint staff-resident business school providing real-world skills to RiverWoods employees that help them grow and move to the next level in their career.

The beautiful photography of Mia Rollins and Seb Pihan’s wedding was provided by Melissa Koren, a local NH Seacoast photographer.