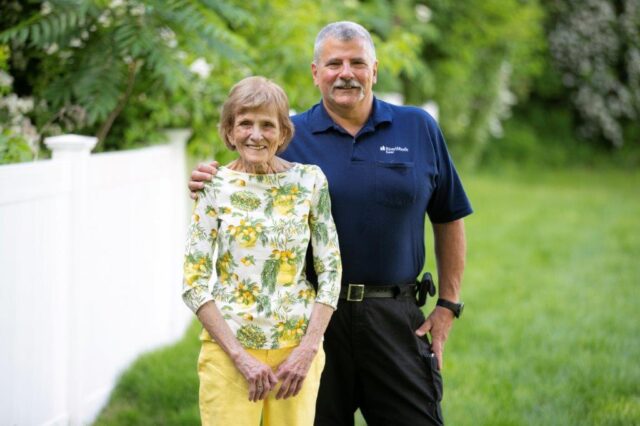 Jean moved to RiverWoods in January of 2022.

Her son John, who is an employee of RiverWoods, says that his mother was always a very social person and became concerned after his stepfather passed away and Jean lived in their home alone.

“She used to always be on the go, sailing boats, traveling everywhere, and so forth. She went from that to sitting at home, watching TV all the time. It was sad, she couldn’t go anywhere, and all her friends were gone or living in other places.”

Living in her house was not a long-term solution

Jean has macular degeneration. When she was living at home alone, John and his siblings arranged for a friend to drive Jean to her shopping and doctor’s appointments. With her inability to see who came to the door, they had a security system installed with cameras, allowing them to screen visitors. “Our job, as family, was to make sure she was living as safely and comfortably as possible,” says John.

He soon discovered this was not a long-term solution. “The first summer she was alone, we all decided to go to camp. Mother was home. She falls and fractures her leg in two places and ends up in a nursing home to recover and for physical therapy. She said then that she did not want to live in a nursing home. ‘I agree,’ I told her. ‘We have to find a place.’”

“I wish we’d looked into RiverWoods”

One day John was having dinner with his mother and she said to him, “I wish we had looked into RiverWoods.”

“RiverWoods would be a perfect fit for you.”

John didn’t know if it was too late for her because RiverWoods has a waitlist. As an employee, John didn’t want to be seen as receiving preferential treatment for his mother. He had his sister Ann take the lead, and after joining the waitlist at RiverWoods Exeter, a home became available.

It’s a lovely place to be

When people ask her how she likes RiverWoods, Jean tells them, “I love it here. It’s the place I should be. I’m making friends now.”

Jean took the time to adjust. “When I first got here, I was recuperating from my fracture and was still reeling from the loss of my husband. I took a month to just bring myself back to where I wanted to be with my health. The nice thing is that I was given that time, by the staff, residents, and my family. When I finally came out to meet people, they were very happy to see me and very gracious. It’s a lovely place to be and I can go outside and walk around, which I do a lot.”

She loves to cook. “I have a lovely kitchen that’s very comfortable for me. The kitchen is what struck me right away, how open it is. My grandson comes once a week and I cook for him. He says he never has a bad meal here,” Jean shares with a smile.

“I don’t want for anything, except to get better with walking. I have a trainer to help me get my legs back. I’m already a lot better than when I first arrived here. I worked hard and it paid off. Everyone here gave me the room to do it.”

John sees a big change in his mother. “She was reluctant to leave her apartment at first, but we didn’t push her. Little by little, she’s walking around the hallways. Next thing you know, she goes to the café and runs into Eliza, a friend of ours. Seeing a familiar face helped her with the transition because this was a radically new life for her. The glow is back in her face.”

John observes that when the family comes to visit, they often have their time cut short as Jean has so many other social engagements.  “She gets around more too, and makes it to her appointments with the help of RiverWoods transportation services.”

A big sigh of relief

The biggest thing for John and his sister is the relief they feel. “I’ve been here since the founding of RiverWoods. The caring and security we provide, that’s one of the reasons I love working here,” John shares.

“What we do here is help people keep their independence as long as possible. I knew there was no other place to go that could give Mother this independence. That’s really special. We count our blessings every day for it.”

Jean agrees, “I look at everything I have and say I’m pretty lucky. Very lucky. That’s all I can say.”